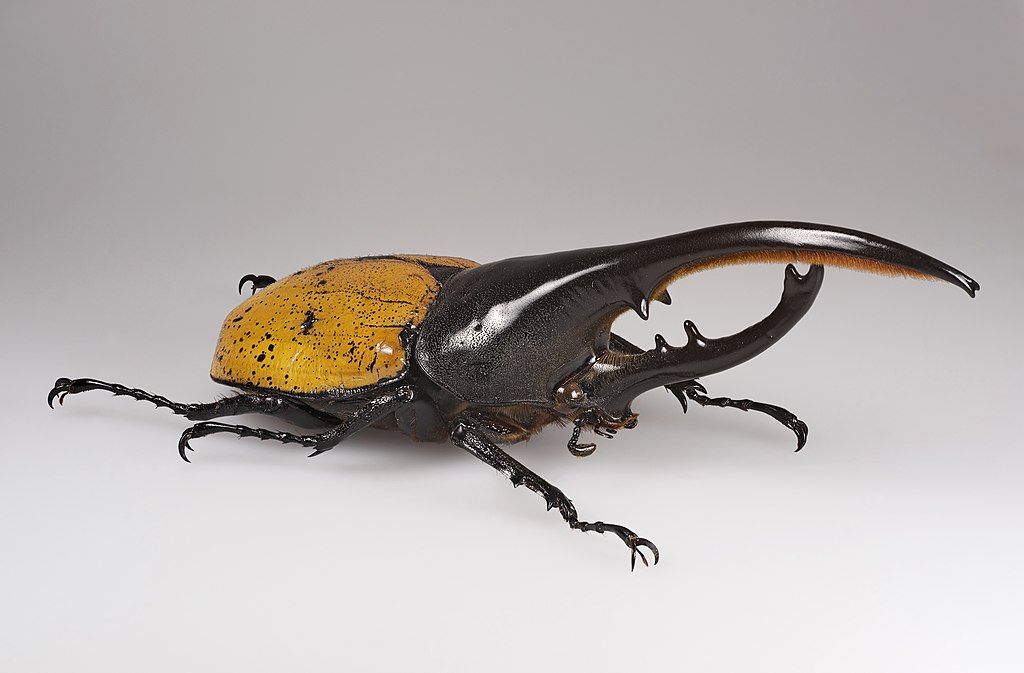 Beetles are a group of insects that form the order Coleoptera (/koʊliːˈɒptərə/), in the superorder Endopterygota. Their front pair of wings are hardened into wing-cases, elytra, distinguishing them from most other insects. The Coleoptera, with about 400,000 species, is the largest of all orders, constituting almost 40% of described insects and 25% of all known animal life-forms; new species are discovered frequently.

The largest of all families, the Curculionidae (weevils), with some 83,000 member species, belongs to this order. Found in almost every habitat except the sea and the polar regions, they interact with their ecosystems in several ways: beetles often feed on plants and fungi, break down animal and plant debris, and eat other invertebrates. Some species are serious agricultural pests, such as the Colorado potato beetle, while others such as Coccinellidae (ladybirds or ladybugs) eat aphids, scale insects, thrips, and other plant-sucking insects that damage crops.

The elytra allow beetles to both fly and move through confined spaces, doing so by folding the delicate wings under the elytra while not flying, and folding their wings out just before takeoff. The unfolding and folding of the wings is operated by muscles attached to the wing base; as long as the tension on the radial and cubital veins remains, the wings remain straight. In some day-flying species (for example, Buprestidae, Scarabaeidae), flight does not include large amounts of lifting of the elytra, having the metathorac wings extended under the lateral elytra margins. The altitude reached by beetles in flight varies. One study investigating the flight altitude of the ladybird species Coccinella septempunctata and Harmonia axyridis using radar showed that, whilst the majority in flight over a single location were at 150–195 m above ground level, some reached altitudes of over 1100 m.

Beetles have a variety of ways to communicate, including the use of pheromones. The mountain pine beetle emits a pheromone to attract other beetles to a tree. The mass of beetles are able to overcome the chemical defenses of the tree. After the tree's defenses have been exhausted, the beetles emit an anti-aggregation pheromone. This species can stridulate to communicate, but others may use sound to defend themselves when attacked.

Parental care is found in a few families of beetle, perhaps for protection against adverse conditions and predators. The rove beetle Bledius spectabilis lives in salt marshes, so the eggs and larvae are endangered by the rising tide. The maternal beetle patrols the eggs and larvae, burrowing to keep them from flooding and asphyxiating, and protects them from the predatory carabid beetle Dicheirotrichus gustavi and from the parasitoidal wasp Barycnemis blediator, which kills some 15% of the larvae.

Beetles are able to exploit a wide diversity of food sources available in their many habitats. Some are omnivores , eating both plants and animals. Other beetles are highly specialized in their diet. Many species of leaf beetles, longhorn beetles, and weevils are very host-specific, feeding on only a single species of plant. Ground beetles and rove beetles (Staphylinidae), among others, are primarily carnivorous and catch and consume many other arthropods and small prey, such as earthworms and snails. While most predatory beetles are generalists, a few species have more specific prey requirements or preferences. In some species, digestive ability relies upon a symbiotic relationship with fungi - some beetles have yeasts living their guts, including some yeasts previously undiscovered anywhere else.